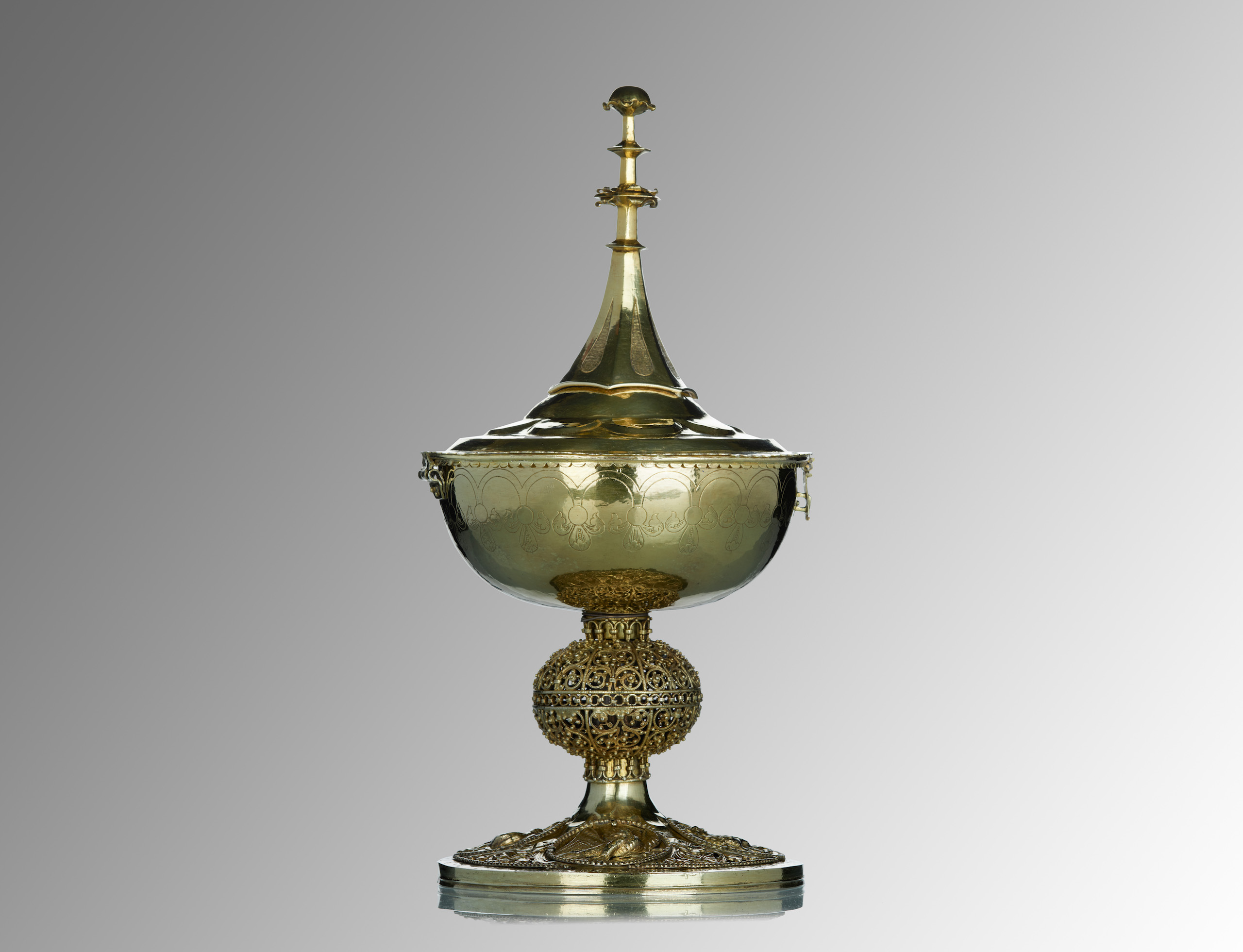 The Treasury of Basel Cathedral

The history of Basel Cathedral’s treasury begins in 1019 with the support of Emperor Henry II. This imperial patronage was not just a pious gesture; it also marked Basel’s political importance for the Ottonian Empire.

The history of the treasury has been shaped through both changes and continuities. Some objects, such as the Golden Altar Frontal, have remained in the collection since its foundation a millennium ago. Many other works came later: gold and silver objects, crosses, monstrances, eucharist chales, as well as relics, books, and textiles. Gifts, donations, and acquisitions tell a story of growth and advancement.

Yet not all parts of the treasury survived the eventful history of Basel and its cathedral. Banners, vestments, and altar cloths deteriorated. Gold and silver was stolen, and books disappeared. Liturgical objects were destroyed, melted down, changed, and in some cases converted into hard cash. Such transformations were not uncommon, and in fact were the norm.

In spite (or because) of these perpetual changes, it is truly remarkable how many of the treasures have survived a millennium, especially those made from precious metals. Even the most major upheavals, the Reformation and the separation of Basel into two cantons, did not destroy them. In the sixteenth century the objects were divested from their liturgical functions, locked away, and almost forgotten, which ultimately preserved them. When they were rediscovered again at the beginning of the nineteenth century, they were acquired by the government, sold on the art market, and entered museum collections. Now, after 1000 years, they are digitized for the first time.

1019
Consecration of the new Basel Cathedral. Emperor Henry II presumably donates the Golden Altar Frontal, the Heinrich Cross, and various other relics and precious items.
1146
Canonization of Henry II.
1200
Canonization of Kunigunde.
1254
Basel receives relics of St. Ursula.
1270
Donation of a fragment of St. Pantalus’s skull from Cologne.
1347
Henry II becomes, next to the Virgin Mary, the second patron saint of Basel Cathedral. Parts of his and Kunigunde’s relics are transferred from Bamberg to Basel. Henry’s feast day of July 13th (the anniversary of his death) becomes a central political and religious event.
1356
The great earthquake destroys the choir and high altar, but the treasures are unscathed.
1431
The convening of the Council of Basel, which remains in session until 1448.
1440
Coronation of antipope Felix V.
1477
The oldest surviving inventory of the cathedral treasury is written.
1501
Basel joins the Old Swiss Confederacy on Henry’s feast day, July 13th.
1529
Reformation and Iconoclasm. Destruction of altars and interior fittings at the cathedral as well as in churches throughout the city. The treasury remains largely spared. The cathedral chapter flees to Freiburg im Breisgau.
1532
Auction of paraments, other textiles, and books, from the treasury’s holdings.
1585
The Treaty of Baden settles the property disputes arising out of the Reformation. The city gives the bishop a severance payment. The cathedral chapter rejects the city’s attempted settlement over their loss of the treasury. The treasury is locked in the sacristy.
1590
44 eucharist chalices and their accompanying patens are melted down.
1590 - 1827
The treasury, still locked away, begins to be forgotten.
1827
The treasury is transferred from the cathedral to the town hall for security reasons. Relics are removed from their reliquaries and preserved in secret.
1833
The Canton of Basel is split into two half-cantons. The cathedral treasury is divided between City and Country based on population proportions; two thirds goes to the Country, and one third to the City.
1834
Relics are transferred to Mariastein Abbey in Canton Solothurn.
1836
Most treasures belonging to Basel-Country are auctioned off in Liestal.
1849
Treasuries belonging to Basel-City are exhibited in the new museum on Augustinergasse. From there they are transferred to the Medieval Collection in 1882, and then in 1894 to the newly established Basel Historical Museum in the Barfüsserkirche.
1933
The Monstrance of the Imperial Couple and the Apostles Monstrance are repurchased from St. Petersburg.
1955
The Reliquary Bust of St. Ursula is repurchased from Amsterdam.
2001
In honor of the 500th anniversary of Basel joining the Old Swiss Confederacy, a major exhibition of the cathedral treasury is opened in the Barfüsserkirche on July 13th. The exhibition also travels to Munich and New York.
2019
The Historical Museum’s holdings of the cathedral treasury are compiled into a digital, interactive exhibition for the first time.

Antependium
From Latin ante (before) and pendere (to hang). Decoration for the front of an altar, usually made from textile or metal.
Authentication
An episcopal document attached to a relic that confirms its origin and authenticity.
Cameo
A gemstone with a carved relief.
Cathedral Chapter
A body of clerics from a bishop’s church (canons) that is responsible for the administrative and liturgical leadership of the church and advises the bishop.
Custodia
From Latin custodire (to protect or guard). A costly liturgical vessel for the presentation of relics or consecrated hosts. Mostly synonymous with monstrance.
Enamel
Solidified glass made from melting salts and metal oxides.
Eucharist
From Ancient Greek eucharistéo (I say thanks). The communion ceremony.
Finial
From Italian foglia (leaf or conifer needle). A small, pointed, decorative turret.
Greek Cross
Cross with four arms of the same length.
Host
From Latin hostia (sacrifice or offering). In most catholic churches the term denotes the bread used for the communion ceremony.
Knop
A knot on the stem of a communion chalice which connects the cup and the base.
Monstrance
From Latin monstrare (to show). A costly, transparent liturgical vessel used to present relics or consecrated hosts.
Ostensorium
From Latin ostendere (to exhibit or show). A costly, transparent liturgical vessel used to present relics or consecrated hosts. Mostly synonymous with monstrance.
Parament
A textile hanging used to decorate the interior of a church during the (Catholic) liturgy.
Paten
From Ancient Greek patáne (bowl). The shallow bowl used for presenting the host during the Eucharist.
Patron / Patroness
The saint to which a church or chapel is dedicated and often named after.
Quatrefoil
Pattern formed by the outline of four overlapping circles of the same size fixed around a central point.
Relic
From Latin reliquiae (remains or remnants). The bodily remains of saints or things that came into contact with them.
Reliquary
Container for storing relics.
RTI
Refection Transformation Imaging is a computational photographic method, that computes a mathematical model of the relief, color and reflection properties of an objects surface from multiple individually lit images. This allows to subsequently view the object in a virtual interactive scene under any lighting conditions. The method enables a wide range of applications for the detailed analysis, documentation and presentation without the need of further access to the object.
Tabernacle
From Latin tabernaculum (hut or tent). A container used in the Catholic Church for containing consecrated hosts that have not yet been consumed.
Trefoil
Pattern formed by the outline of three overlapping circles of the same size fixed around a central point.
Vestment
The festive attire of a church dignitary worn on official occasions.
150 MPixel
Die high resolution images were captured with a digital camera with 150 Megapixels under studio conditions. This allows the depiction of minute details. To reduce loading time of the very big image files, muensterschatz.ch downloads only the currently viewed parts of the image. This allows a smooth experience of viewing the high resolution images even on mobile devices.
Muensterschatz.ch